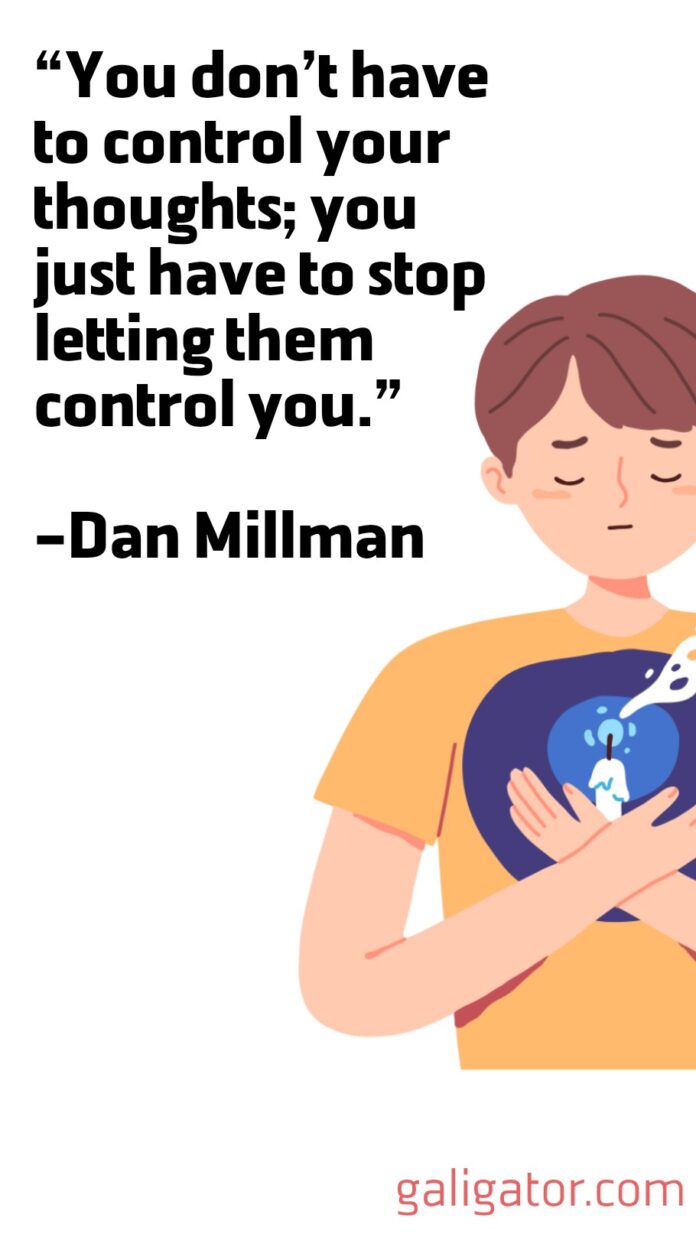 “Feelings come and go like clouds in a windy sky. Conscious breathing is my anchor.”
—Thich Nhat Hanh 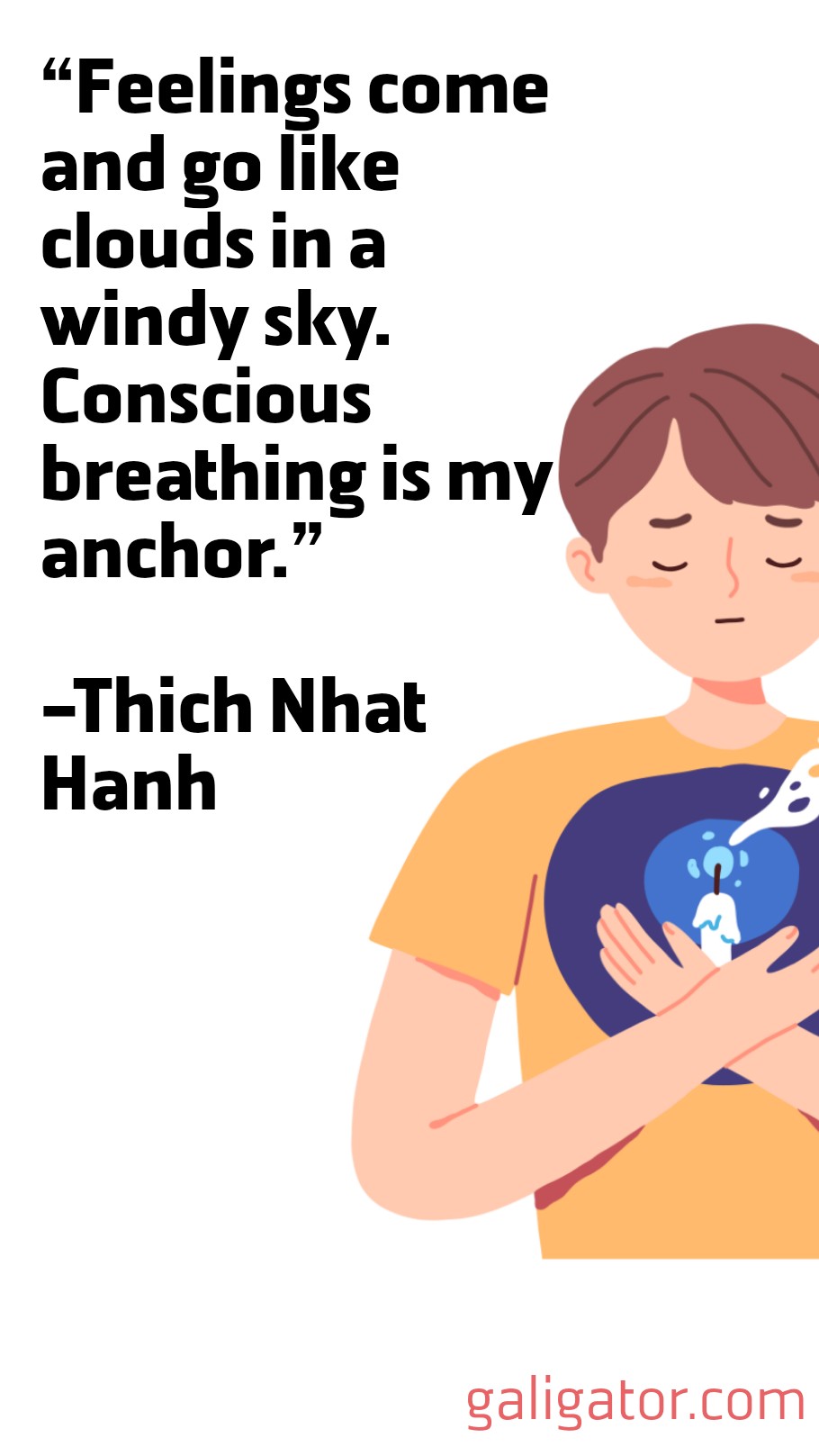 “Anxiety was born in the very same moment as mankind. And since we will never be able to master it, we will have to learn to live with it— just as we have learned to live with storms.”
—Paulo Coelho
“Every time you are tempted to react in the same old way, ask if you want to be a prisoner of the past or a pioneer of the future.”
—Deepak Chopra
“People become attached to their burdens sometimes more than the burdens are attached to them.”
—George Bernard Shaw
“It’s not time to worry yet.”
—Harper Lee
“If you can’t fly, run. If you can’t run, walk. If you can’t walk, crawl, but by all means, keep moving.”
—Martin Luther King, Jr.
“Almost everything will work again if you unplug it for a few minutes, including you.”
—Anne Lamott
“My anxiety doesn’t come from thinking about the future but from wanting to control it.”
—Hugh Prather
“If you don’t like something, change it. If you can’t change it, change your attitude.”
—Maya Angelou
“The way you tell your story to yourself matters.”
—Amy Cuddy
“Worry often gives a small thing a big shadow.”
—Swedish proverb
“Your calm mind is the ultimate weapon against your challenges.”
—Bryant McGill
“If we wanted to change the situation, we first had to change ourselves. And to change ourselves effectively, we first had to change our perceptions.”
—Stephen Covey
“A positive attitude gives you power over your circumstances instead of your circumstances having power over you.”
—Joyce Meyer
“It’s not stress that kills us, it is our reaction to it.”
—Hans Selye
“Some days, doing ‘the best we can’ may still fall short of what we would like to be able to do, but life isn’t perfect—on any front—and doing what we can with what we have is the most we should expect of ourselves or anyone else.”
—Fred Rogers

“Do what you can, with what you’ve got, where you are.” 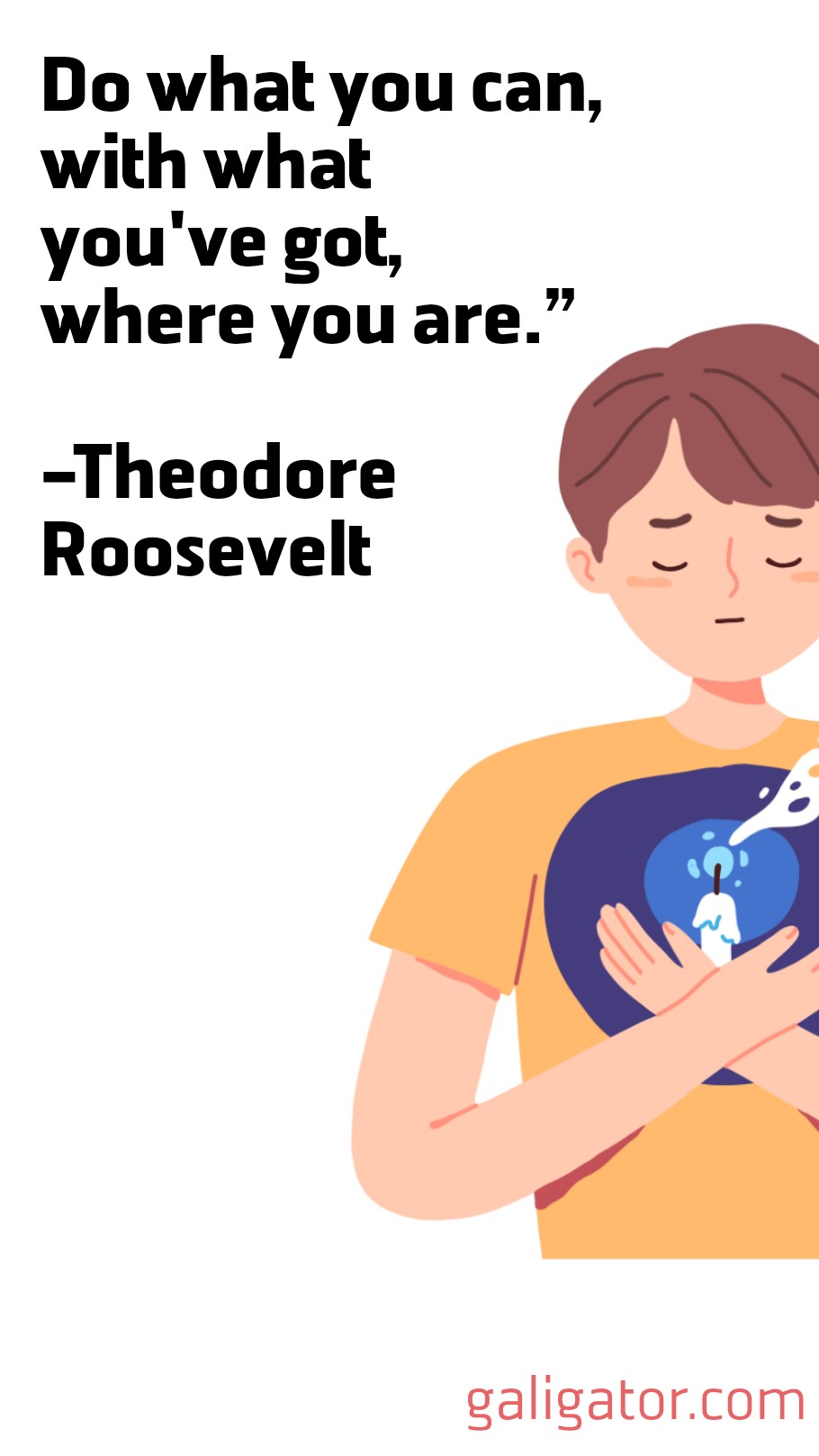 “Nothing can bring you peace but yourself.”
—Ralph Waldo Emerson
“The great thing, then, in all education, is to make our nervous system our ally instead of our enemy.”
—William James
“Tension is who you think you should be. Relaxation is who you are.”
—Chinese proverb
“The time to relax is when you don’t have time for it.”
—Sydney J. Harris
“When you feel overwhelmed, remember: A little at a time is how it gets done. One thing, one task, one moment at a time.”
—Anonymous
“Surrender to what is, let go of what was, and have faith in what will be.”
—Sonia Ricotti
“Calm mind brings inner strength and self-confidence, so that’s very important for good health.”
—Dalai Lama
“You wouldn’t worry so much about what others think of you if you realized how seldom they do.”
—Attributed to Eleanor Roosevelt
“Present fears are less than horrible imaginings.”
—William Shakespeare
“You have dug your soul out of the dark, you have fought to be here; do not go back to what buried you.”
—Bianca Sparacino
“Everyone remembers the remark of the old man at the point of death, that his life had been full of troubles—most of which had never happened.”
—Winston Churchill
“Rule number one: Don’t sweat the small stuff. Rule number two: It’s all small stuff.”
—Robert S. Eliot
“We ourselves feel that what we are doing is just a drop in the ocean. But the ocean would be less because of that missing drop.”
—Mother Teresa
“Sometimes letting things go is an act of far greater power than defending or hanging on.”
—Eckhart Tolle
. “The elimination diet: Remove anger, regret, resentment, guilt, blame and worry. Then watch your health, and life, improve.”
—Charles Glassman
“The universe doesn’t allow perfection.”
—Stephen Hawking
“A crust eaten in peace is better than a banquet partaken in anxiety.”
—Aesop
“Worry in the dark can make it even darker.”
—Camron Wright
“Maybe you have to know the darkness before you can appreciate the light.”
—Madeleine L’Engle
“There are moments when all anxiety and stated toil are becalmed in the infinite leisure and repose of nature.”
—Henry David Thoreau
“What else does anxiety about the future bring you but sorrow upon sorrow?”
—Thomas á Kempis
“Nothing is permanent in this wicked world—not even our troubles.”
—Charlie Chaplin
“When you walk through a storm hold your head up high, and don’t be afraid of the dark/At the end of the storm is a golden sky, and the sweet silver song of a lark.”
—Oscar Hammerstein II
“For us, there is only the trying. The rest is not our business.”
—T.S. Eliot
“Actually spending ten minutes clearing off one shelf is better than fantasizing about spending a weekend cleaning out the basement.”
—Gretchen Rubin
“Good humor is a tonic for mind and body. It is the best antidote for anxiety and depression…It lightens human burdens. It is the direct route to serenity and contentment.”
—Grenville Kleiser “I know but one freedom and that is the freedom of the mind.”
—Antoine de Saint-Exupery
“We must be willing to get rid of the life we’ve planned, so as to have the life that is waiting for us.”
—Joseph Campbell
“Our stresses, anxieties, pains and problems arise because we do not see the world, others or even ourselves as worthy of love.”
—Prem Prakash
“We live only a few conscious decades, and we fret ourselves enough for several lifetimes.”
—Christopher Hitchens
“We all have anxiety about things. We all have little insecurities, but eventually you have to face your fears if you want to be successful, and everybody has some fear of failure.”
—Nick Saban

“Anxiety’s like a rocking chair. It gives you something to do, but it doesn’t get you very far.”
—Jodi Picoult 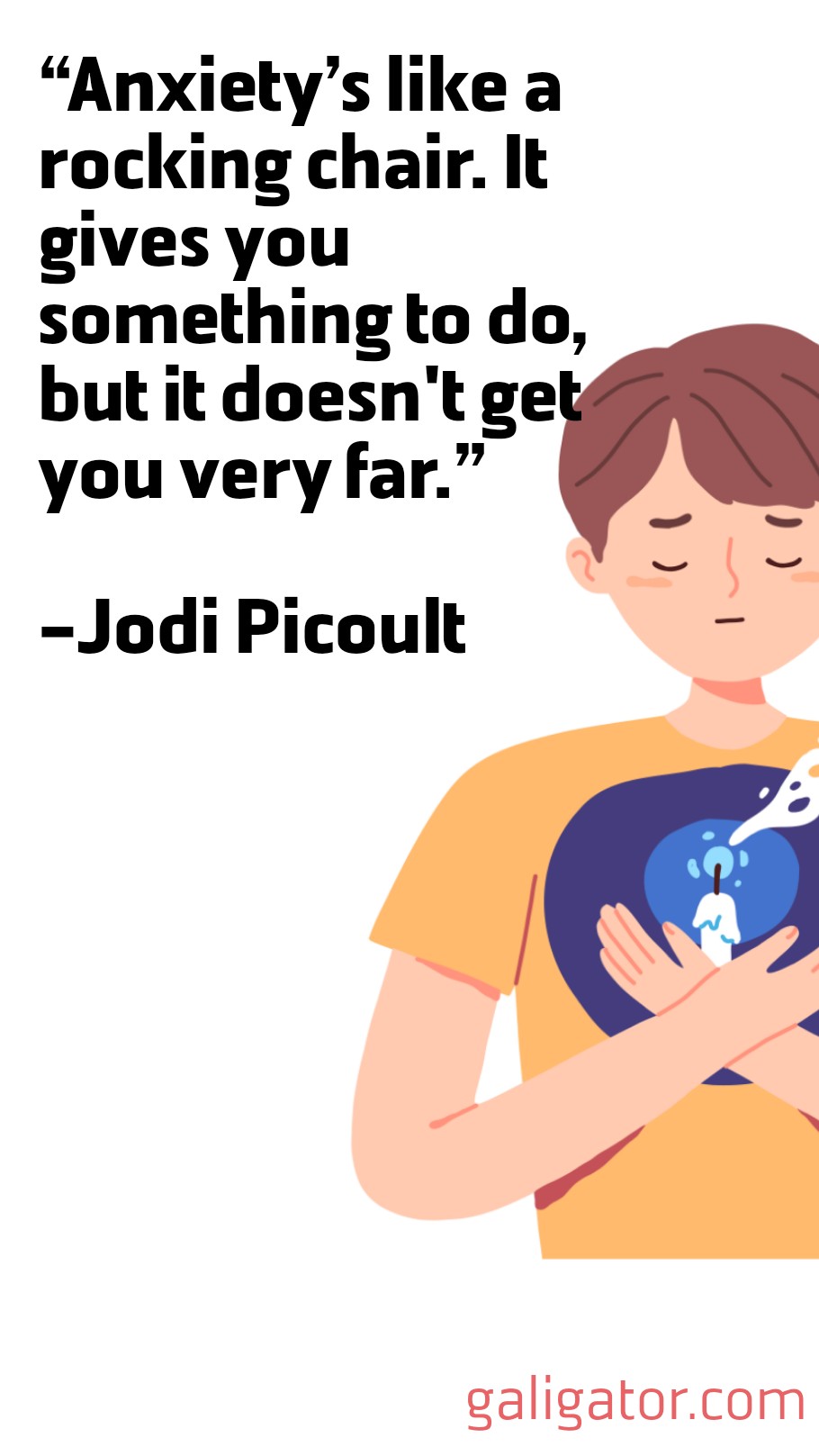 “Happiness is not a brilliant climax to years of grim struggle and anxiety. It is a long succession of little decisions simply to be happy in the moment.”
—J. Donald Walters
“Become a worry-slapper. Treat frets like mosquitoes. Do you procrastinate when a bloodsucking bug lights on your skin? ‘I’ll take care of it in a moment.’ Of course, you don’t! You give the critter the slap it deserves. Be equally decisive with anxiety.”
—Max Lucado
“In the end, just three things matter: How well we have lived. How well we have loved. How well we have learned to let go.”
—Jack Kornfield
“There must be quite a few things that a hot bath won’t cure, but I don’t know many of them.”
—Sylvia Plath
“I tell you the past is a bucket of ashes, so live not in your yesterdays, not just for tomorrow, but in the here and now.”
—Carl Sandburg
“The man who moves a mountain begins by carrying away small stones.”
—Confucius
. “Sometimes the bad things that happen in our lives put us directly on the path to the most wonderful things that will ever happen to us.”
—Nicole Reed
“What lies behind us and what lies before us are tiny matters compared to what lies within us.”
—Henry Stanley Haskins
“You don’t have to control your thoughts; you just have to stop letting them control you.”
—Dan Millman 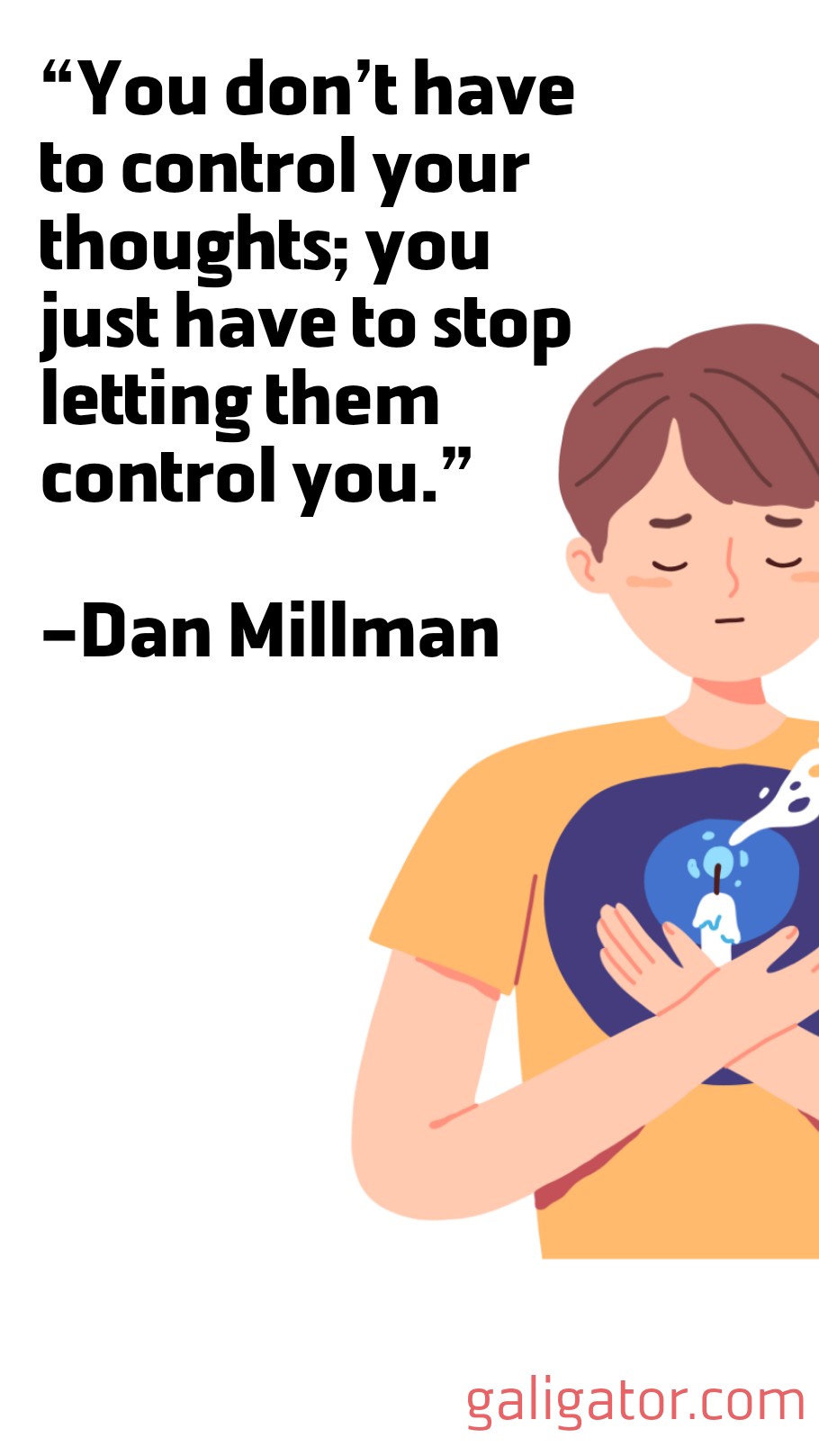 “There is no chance, no destiny, no fate, that can circumvent or hinder or control the firm resolve of a determined soul.”
—Ella Wheeler Wilcox
“You don’t drown by falling into water. You only drown if you stay there.”
—Zig Ziglar
“Grant me the serenity to accept the things I cannot change, the courage to change the things I can, and the wisdom to know the difference.”
—Reinhold Niebuhr
“In order to move on, you must understand why you felt what you did and why you no longer need to feel it.”
—Mitch Albom
“Anxiety happens when you think you have to figure out everything all at once. Breathe. You’re strong. You got this. Take it day by day.”
—Karen Salmansohn
“Calmness is the cradle of power.”
—Josiah Gilbert Holland
“Don’t underestimate the value of Doing Nothing, of just going along, listening to all the things you can’t hear, and not bothering.”
—A.A. Milne
“Anxiety is a lot like a toddler. It never stops talking, tells you you’re wrong about everything, and wakes you up at 3 am.”
—Anonymous
“Many of us feel stress and get overwhelmed not because we’re taking on too much, but because we’re taking on too little of what really strengthens us.”
—Marcus Buckingham

“Life is ten percent what you experience and ninety percent how you respond to it.”
—Anonymous 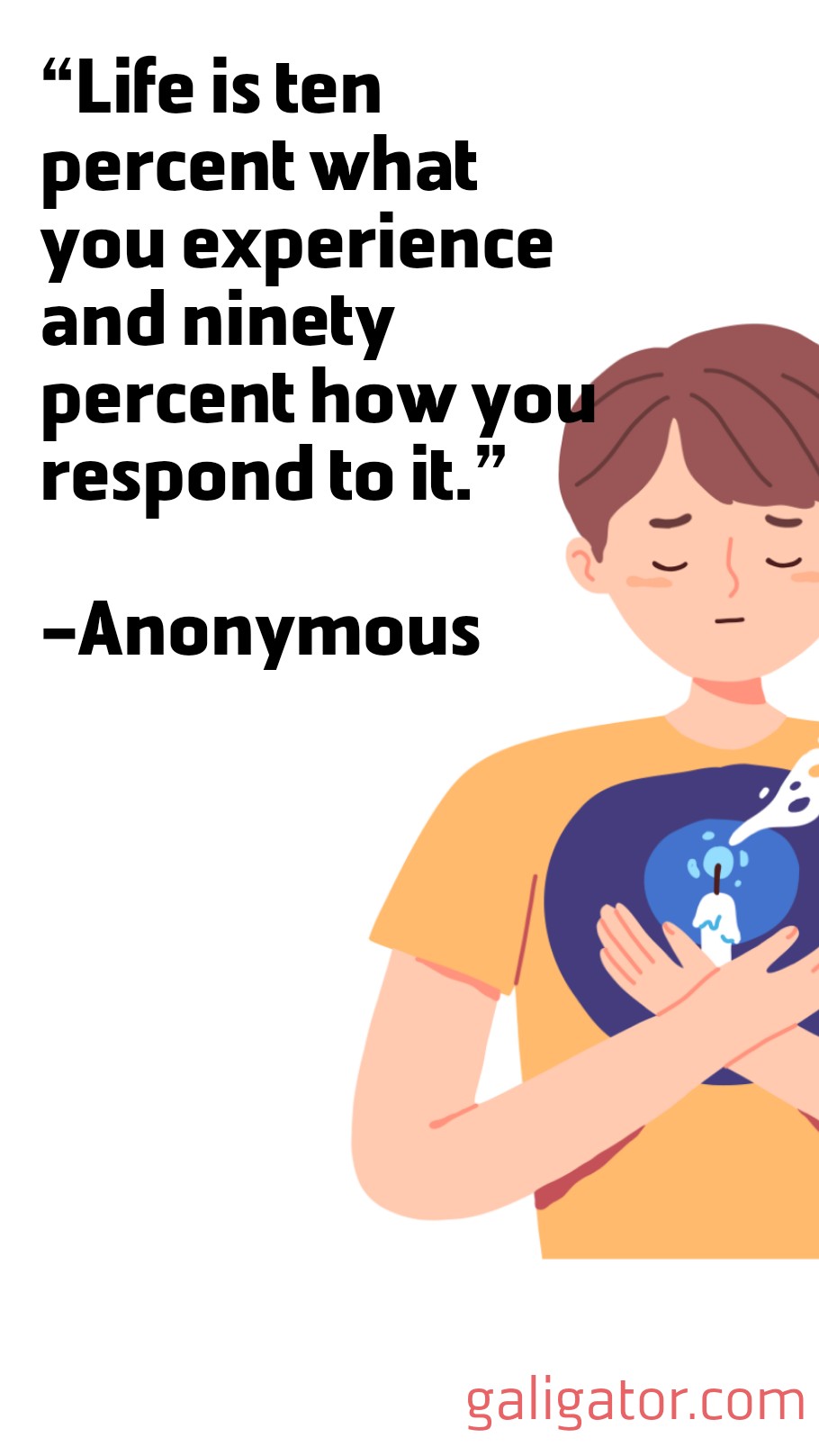 “Comedy is defiance. It’s a snort of contempt in the face of fear and anxiety. And it’s the laughter that allows hope to creep back on the inhale.”
—Will Durst
“You can’t stop the waves, but you can learn to surf.”
—Jon Kabat-Zinn
“Going through things you never thought you’d go through will only take you places you never thought you’d get to.”
—Morgan Harper Nichols
“There are two ways to get rid of an anxiety monster, my friend—you either have a bath or a nap.”
—Andrew Kaufman
“Don’t let yesterday take up too much of today.”
—Anonymous
“The best thing one can do when it is raining, is to let it rain.”
—Henry Wadsworth Longfellow